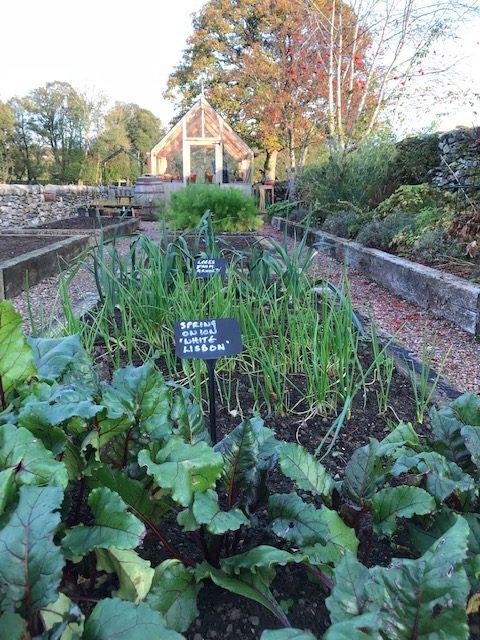 Over the past few weeks, I’ve been clearing the beds in the Kitchen Garden.

We have raised beds made from old railway sleepers.  These beds are great, they drain well, the soil warms up quickly in the Spring, and they are very easy to weed as I can reach every part of the bed without treading on the soil.  Another plus is that it’s not so far to bend down!

Most of the beds are completely cleared in Autumn – root crops for Winter harvest don’t do very well here – they tend to be attacked by carrot fly and so I have given up on them and just keep going with things like bulb fennel, leeks, beetroot, spring onions and the like.

In April, Arnold gave me some little leek seedlings, all in one pot.  I carefully separated the tiny plants, with a pair of scissors I trimmed their roots to about 1cm and cut the leafy part down to about 3cm.  With my trusty old wooden dibber,  I made holes about 8cm deep,  15cm apart and with about 20cm between rows.  I popped the plants in and gently watered the holes.  No need to fill them with soil, the leeks just expand as they grow and miraculously don’t seem to get grit inside their leaves.

The leeks are nice and fat now, but not too big and tough, so I am making Leek and Potato Soup later today.  It’s a wonderfully restorative soup and would be just the thing for the shorter days which begin this coming weekend.

1.5l of good Stock (I use homemade chicken stock with much rosemary, garlic, a pinch of saffron to give a golden hue to the soup, I also use unpeeled onions as this is also a gold-colour giver)

Dice the potatoes and slice the leeks, stopping before you get to the dark green part.

In a large pan, sweat them gently in the butter, don’t let them brown

Add the stock and seasoning, simmer for about 20 minutes

Reheat gently in the pan and add the cream, stir until it bubbles gently but don’t boil

Serve, garnished with the chives or spring onions

Fresh, warm crusty bread goes down well with this.