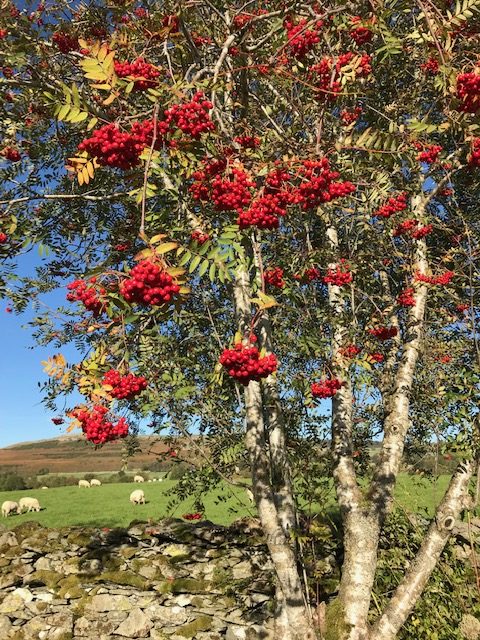 There are three lovely Rowan trees in a line down the old stone wall of my Kitchen Garden.

In the spring they are a mad froth of white blossom which, when the wind blows, flies around like miniature confetti.  Come September and the trees are covered with a mass of vivid orange-red berries.  We’ve had many days with bright blue skies and the berry-laden trees against the sky are an absolute picture.  The birds, particularly the blackbirds, feast on the berries.

The Scots often have a rowan tree at the gate to their garden, ‘to ward off the witches’.  My grandmother had three by her gate and when I was very small my sister Mary and I cultivated a tiny sapling in a pot by the door to our own house.  Mother planted it in the ground by the gate and it thrived.  When we moved house, a neighbour came to help dig up the rowan as it had been decided it needed to move with us.  Disaster struck when the neighbour cut through the tap root, killing the poor tree.  Much weeping and wailing and gnashing of teeth on my part.  Mary and Mother never forgave poor Mrs Harvey.

The rowan’s place in mythical history go back to classical times.  In Greek mythology, Hebe, the goddess of youth would dispense from a golden chalice her magical potions to the gods.  Demons stole the chalice so the gods sent an eagle to rescue it.  In the ensuing battle between the eagle and the demons, feathers and drops of blood fell from the heavens to earth.  The feathers and drops of blood turned into the leaves and berries of rowan trees.

A physical characteristic of the berries carries mystical importance.  Each berry has a tiny five- pointed star at its end.  The pentagram is an ancient protective symbol.  The colour red was further deemed to be the best protection against witches and enchantments.

So, it seems we Scots were right to keep the rowan trees by the gate.  As recently as the late 1990’s in the Scottish Highlands, there was documentation warning new occupiers of property not to remove or damage any rowan tree.

We’re going to look after our rowan trees.  If the blackbirds don’t beat me to picking the berries, I may make rowan jelly which is jewel-bright and delicious with venison and most game dishes.