RING THE BELL FOR PICCALILLI » 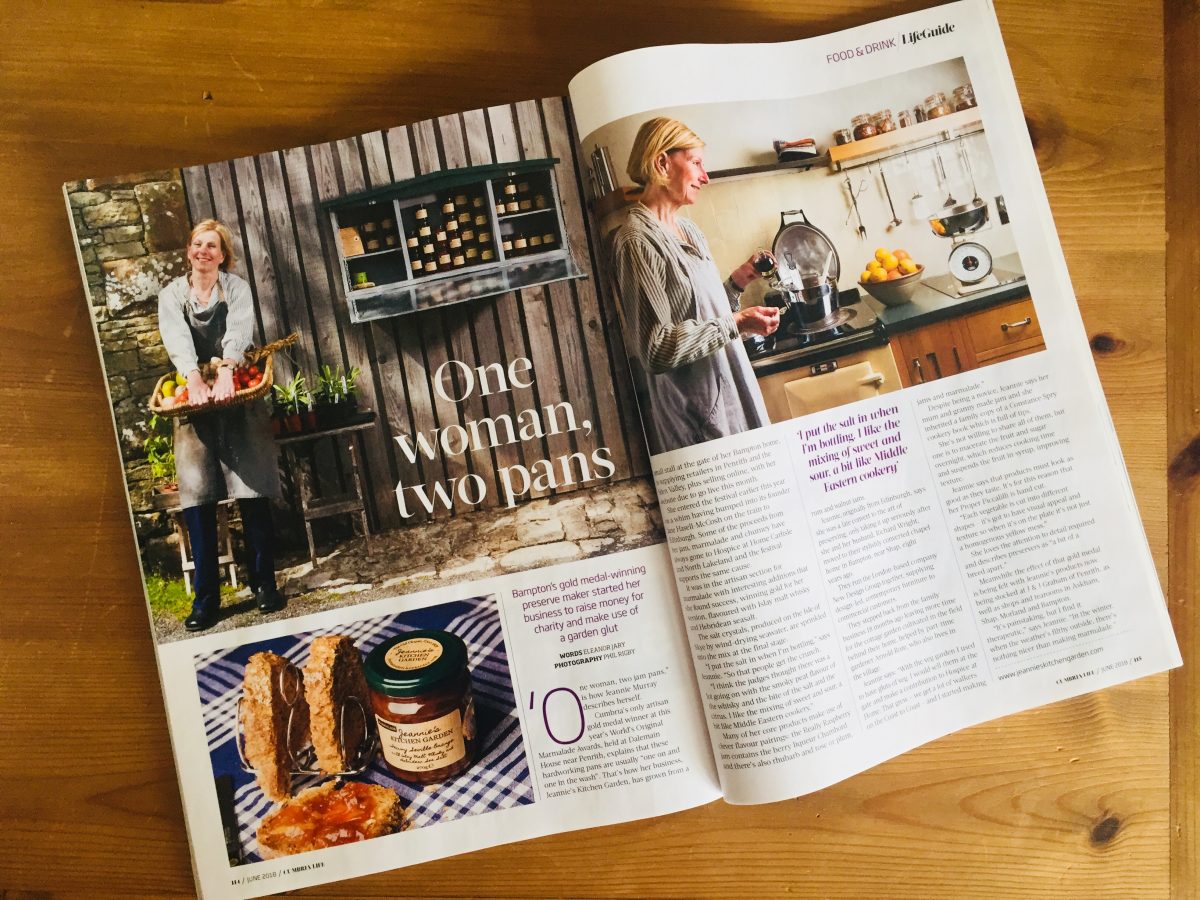 We like Cumbria Life magazine in this house. Full of interesting features, homes and gardens, food and drink and the property section showcases some of the beautiful houses for sale across the county. The photography is lovely.

The magazine often writes about the effect the Lake District National Park’s new status as World Heritage Site is having on the area, with news of enterprises gearing up for the increase of visitors the new status is already generating. I follow the progress of these artisan and creative enterprises. Bread makers, cheese producers, gin distillers, beer brewers, fish smokers, sustainable compost makers, artists and potters, a plethora of new hotels, restaurants and cafes, there’s no end to the innovation.

I was surprised when I had a call in May from Eleanor Jary, writer for Cumbria Life, asking if she could do a piece about Jeannie’s Kitchen Garden, and that Phil Rigby, the more-than-talented photographer at the magazine would be along to take some photos of me and the garden. Eleanor had heard that I’d won a Gold Award in the Artisan category of the World’s Original Marmalade Awards at Dalemain in March of this year.

On the appointed day, Eleanor arrived at the Old Chapel and we had a jolly hour or so chatting. Eleanor and her husband Sam used to live in Burgundy, Sam still has an interest in a vineyard there and makes organic and biodynamic wines, he has Black Hand Wines in Brunswick Yard in Penrith.

Eleanor and I got talking about how the glut of fruit and vegetables in my garden started the preserve-making, the chutney range I made spawned a marmalade and jam range, selling to local shops and at our gate. We talked about how I’d met Jane Hasell-McCosh of Dalemain on a train to Edinburgh, Jane and I got talking about marmalade (as you do, she is the founder of the Marmalade Awards.) Back at home that evening I decided I’d enter some marmalade in the Awards. I make various varieties but created a new variety, Tawny Seville with Islay Malt and Hebridean Sea Salt. The salt’s from the Isle of Skye Sea Salt Company, totally natural sea salt, from seawater dried by the wind and the sun. Bottling the marmalade, I sprinkled a few crystals in, some at the bottom of the jar, some half way up and a wee bit more on the top to give a salty crunch throughout, then a dash of the Malt. The judges seemed to like it.

Eleanor knew that I was the only person in Cumbria to win a Gold Award in the Artisan category at the Awards. People from all over the world won awards, as far as Australia and Japan. Dignitaries with marmalade connections such as the Japanese Minister Plenipotentiary and the Indian High Commissioner were at the Awards reception. The Awards raise an extraordinary amount of money for local charity Hospice at Home Carlisle and North Lakeland. Jeannie’s Kitchen Garden Supports Hospice at home too.

Phil Rigby took cheery photos in the garden. The article  appeared in the June issue of the magazine. The people of Bampton were probably amused to see someone from the village smiling out of the pages at them. Read the full article here.

Back to old clothes and porridge now. Got preserves to make….

RING THE BELL FOR PICCALILLI »