A DAY OF CONTRASTS » 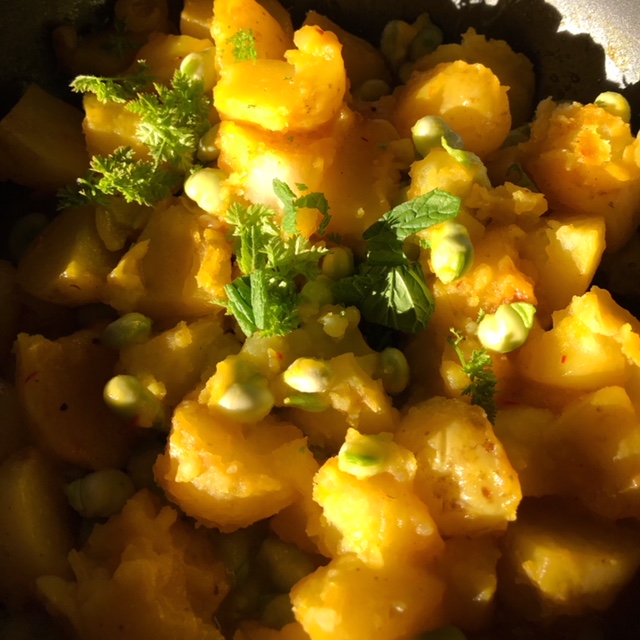 I always grow the same variety of new potatoes.  An old variety called Sharpe’s Express which became popular in the early part of last century.  Lifted from the garden in the early evening, a quick burst from the hosepipe to blast off the fine skins and they’re ready for the pot.

They’re at their best when eaten young and small.  Last week I lifted the last two plants, the potatoes were rather large and I knew that if I boiled them whole, or even steamed them, they would probably fall apart.  I dreamt up this recipe and it turned out well.

We buy great ham from J&J Graham’s in Penrith, Alan, their chef, bakes it himself.  It’s named after him, Alan’s Ham.  We like it sliced at No. 3 on the slicer, not too thin, not too thick.

A simple supper (outside in the garden, again!) of Alan’s ham and the potato dish, just lovely.

500ml vegetable stock (I sometimes make my own with onion, celery and carrot, lots of herbs and a fair bit of saffron to give a golden colour, but the shop-bought Marigold bouillion is excellent, add a good pinch of saffron strands)

2 cups of shelled broad beans, try to use really young, tender ones

Heat half the butter in a non-stick frying pan and add the olive oil to stop the butter burning.

Add the chopped spring onion and cook on quite a high heat until nicely browned.

Add the diced potatoes and pour enough vegetable stock over to just cover the potatoes, stir gently from time to time.

Simmer the potatoes in the stock until tender to the point of a sharp knife and the stock has pretty well evaporated.

Add the rest of the butter, gently stir in the broad beans then season to your liking with sea salt and black pepper.

Serve in a warmed dish with the torn mint leaves scattered on top.

A DAY OF CONTRASTS »