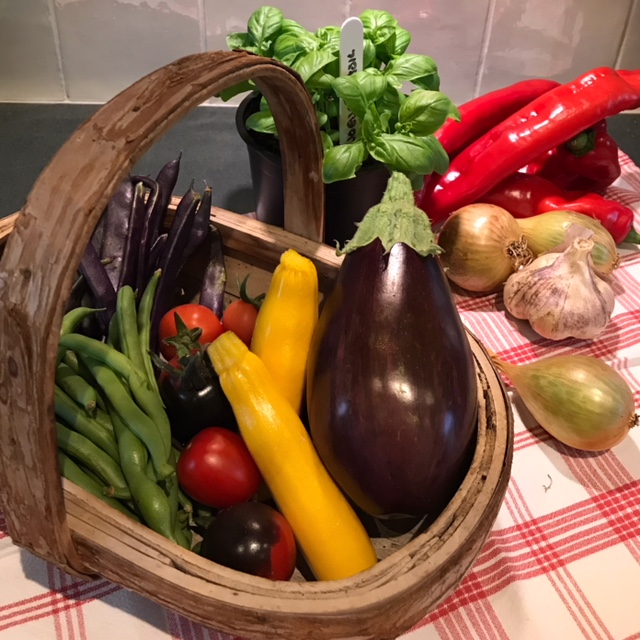 The other evening, we decided to roast a couple of fine local Goosnargh chickens, generously filled with our rosemary, thyme, garlic and a couple of lemons.  I lifted the skin of the breasts and carefully pushed well seasoned butter under the skin, a good tip for juicy breast meat, then into the Aga with them.

I set off to the Kitchen Garden to see what vegetables might be ready and a suitable match for the chickens.

The basket I returned with, pictured here, gave me no doubt as to the dish.  Ratatouille.  I do admit that the red peppers did not come from the greenhouse but from the greengrocer.  Everything else was newly-picked from the garden.

I think Ratatouille is such a lovely dish if carefully prepared and it’s great the next day served at room temperature and wonderful on a picnic.

Chop the onions fairly small and saute them gently in the olive oil in a large frying pan (use one with a lid as you’ll need the lid later).  When the onions are soft, but not yet brown, turn the heat right down.

Cut the aubergines, skin on, into small cubes and sprinkle over with rough sea salt.  Put them in a colander over a bowl to allow the liquid they will give off, to drain away. After about 10 minutes, turn the heat up in the pan and add the aubergines and fry until brown and the onions have taken on a good colour too.

Slice the red peppers lengthwise into quarters, discard the seeds, cut the courgettes into large batons and add both to the pan, cook until soft.  Peel and crush the garlic cloves and add to the mixture along with the tomatoes, cut in half. Add the trimmed French beans at this point if you are using them. Add the coriander seeds and rosemary, give a good few turns of the pepper mill.

Add the red wine and cover the pan.  Let it simmer for about 45 minutes.  The tomatoes and wine will make the mixture more liquid but most of the liquid should have evaporated after the end of the cooking time.  Nothing worse than very wet ratatouille so do keep cooking it until the liquid is pretty well gone, the vegetables tender but not mushy.

Spoon into a warmed rustic serving dish. Sprinkle some torn basil leaves on the top.