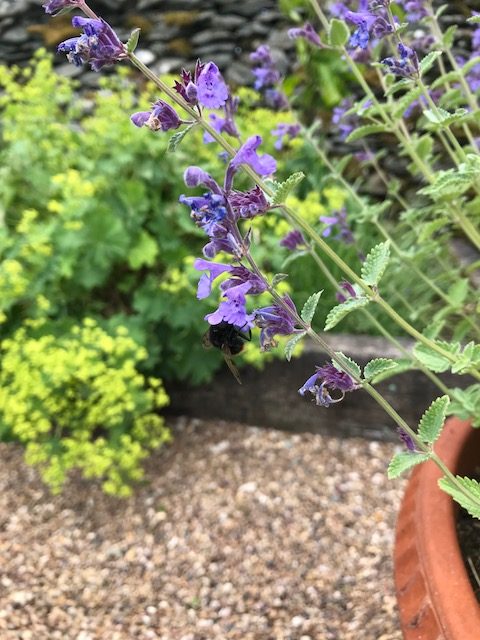 I should have listened to Arnold (wise local person who lives in the valley and helps in the garden) when he said last week on Wednesday afternoon, ‘OK Jeannie, I’m off to make some things safe over the way, what with these high winds coming’. I listened instead to Richard (my husband) who said ‘Nothing untoward with the weather tomorrow, Jeannie, light rain and breezy’. That’s Richard now aka Michael Fish Mark 2.

Up early on Thursday morning to let the chickens out and walk the pugs, I couldn’t believe the scene of devastation in the kitchen garden. French and Borlotti beans with all their leaves gone, broad beans knocked sideways, onions broken off at the base, brassicas ripped clean out of their snug beds. The glorious delphiniums in the border collapsed in a dead faint. The peonies still in bud so not heavy enough to break but certainly swooning. All alliums blown to the four corners of the garden. At the side of the house there’s a trestle table stacked with baby plants I’m bringing on to sell at the gate, fortunately tucked into wooden trays so not blown to Kingdom Come but certainly with the look of having been in a wind tunnel at full force all night.

At the edge of our little river, many trees had lost large limbs and some very big trees had come down in neighbouring fields. A just-fledged chaffinch lay newly dead on a path, poor little thing must have been buffeted against a wall or tree, so sad.

I could have cried. The chickens sulked in their run most of the day, I cowered in the house, making several batches of Traditional Strawberry jam (lovely Scottish strawberries in season now) and a bit of Three Fruit Marmalade with Cointreau while the wind howled outside. At least I caught up with stocks. Arnold appeared in the afternoon with his trusty chainsaw, leafblower and his other wonderful tidying-up bits of apparatus and by teatime he and Richard had removed most of the evidence of the storm. Then the wind dropped . The long border in the kitchen garden, normally full to bursting with tall herbaceous flowers, has all been cut back to the ground. I am hoping for a long spell of calm weather with gentle Lake District drizzle to encourage the poor plants to start all over again….

We garden against the odds in this part of the country. Frosts come as late as the end of May and as early as mid-September. Great squalls of rain descend without notice but wind like last week’s are very rare at this time of year. The countryside had been looking heavenly with the hedgerows big and blowsy, rather flattened now but they will pick themselves up a bit and the summer will continue to make its stately progress, storm or no storm. The storm was called Storm Hector. They shouldn’t give storms people’s names, it just encourages them.

I didn’t want to post a photo of the damage so here is a pot of Nepeta against a background of vivid Alchemilla, in a sheltered corner.