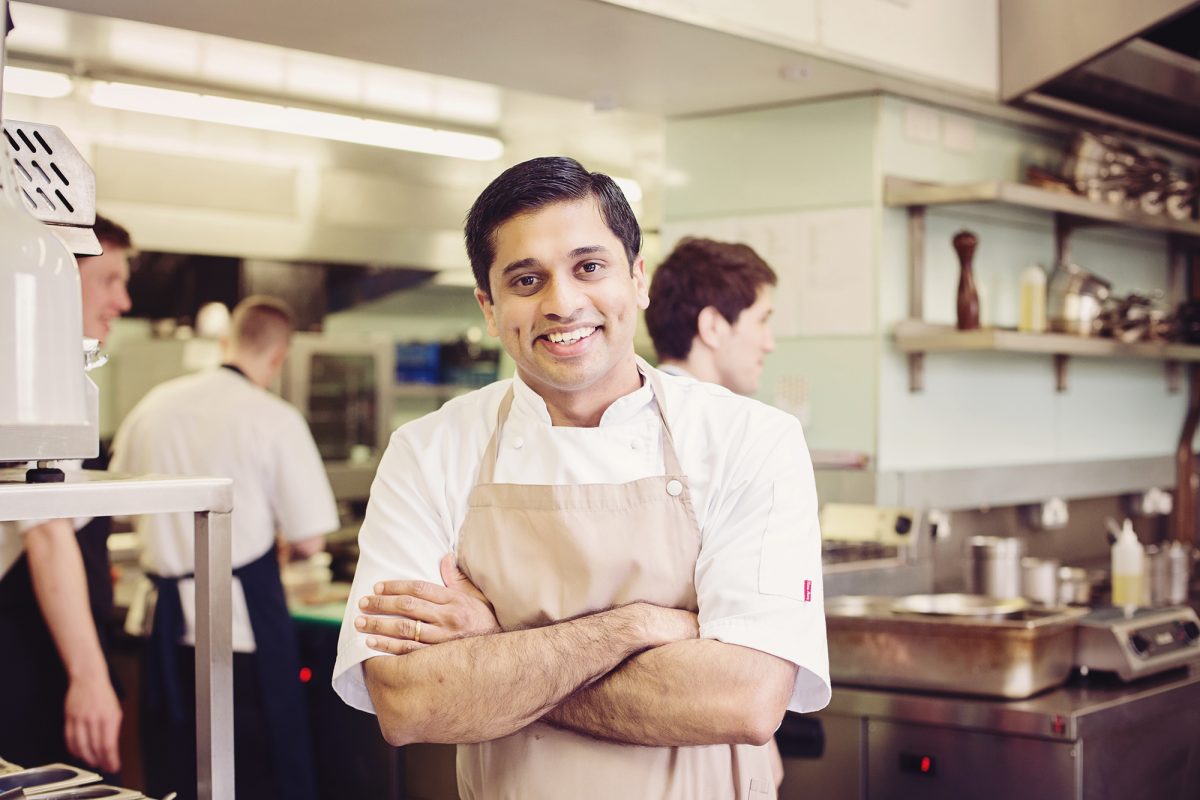 Last week I received a call from Helen Millican of BBC Radio Cumbria, that in itself came as something of a surprise.  Helen hosts an ‘In Conversation’ show called ‘The Gathering’ every Wednesday evening.  The second surprise was that Helen wanted to know if, with my Jeannie’s Kitchen Garden hat on,  I might be interested in coming on her show but the final, and most exciting surprise for me was that her other guest was Hrishikesh Desai, Michelin Star chef of Gilpin Hotel and Lake House.

I certainly was thrilled by the idea of meeting Hrishi and so off I went on the train to Carlisle to the BBC Cumbria studios.  I took my trusty basket filled with various scones, oatcakes and so on with preserves for Helen and Hrishi to try at the end of the show.  Everyone else at Carlisle station was scurrying about with briefcases and backpacks, I felt a bit like Little Red Riding Hood with my basket with its red checked cloth on top.  I knew I wasn’t off to meet a Wolf mind you.

At the studio I discovered we had a third guest on the show,  John Hanly, who is writing a ‘Chemo Cookery’ book.  John has prostate cancer and is collating a collection of recipes which are nutritious and which tempt the palate of people undergoing chemotherapy who are probably not feeling very good and certainly neither hungry nor wanting a faff in the kitchen. Hrishi had contributed a recipe for a delicious-sounding chicken dish with a butternut risotto.

Back to Hrishi and our conversation.  It’s hard to believe someone still only in their 30’s could have packed in so much. Hrishi fell in love with the world of hospitality at the tender age of four when his parents took him to a family wedding at the opulent Blue Diamond Hotel in their home city of Pune, India.  Hrishi was overwhelmed by the chandeliers, the marble floors and huge windows, the waiters in their immaculate livery,  the colour and glamour of the food.  He told his parents then that he wanted to be part of that world.  Aged only 19,  Hrishi studied at the Institut Paul Bocuse in Lyon, he won the Roux Scholarship in 2009 and went on to work in such restaurants as les Maisons de Bricourt (2*) in Normandy (Richard and I went there a few years ago, it’s beautiful), The French Laundry (3*) in the Napa Valley, California, Lucknam Park, (1*) Wiltshire to name but a few.  Hrishi joined Gilpin here in the Lake District in 2015 and won them a Michelin Star in his very first year.  2018 was an amazing year for Hrishi, he won four major accolades including the prestigious Relais et Chateaux Upcoming World Chef of the Year and the Cumbria Life Best Restaurant of the Year.

The radio programme went out live, it’s three hours long, much chat but interspersed with music.  It was so interesting to talk to Hrishi and what a modest, charming and amusing fellow he is, full of anecdotes about his culinary journey.  Also a privilege to meet and chat to John Hanly.

I thought I would be completely eclipsed by Hrishi’s much more interesting story but we actually did cover a lot of ground on the subject of preserves, the importance of the ingredients and the care and love that must go into producing something that people will understand and appreciate.  Hrishi believes that food should create happy memories, the spices he uses remind him of his mother’s home cooking in India, my marmalades’ flavours remind me of my mother and grandmother’s marmalades of many years ago, my small but loyal band of followers tell me that my blackcurrant, gooseberry and raspberry jam taste the way jam used to taste.

We did have a tasting session at the end.  Helen, Hrishi and John were all very enthusiastic about trying out all the various offerings and were complimentary about everything.  Hrishi wanted my Rhubarb and Rose Extra Jam to be much more pink, so he suggested an all-natural addition (secret, you understand), I’ll be trying that out very soon. Hrishi had brought a selection of beautiful, elegantly shaped and glossy chocolates.  The Tonka Bean one was outstanding, the Brandy one divine and the Coconut one sophisticated and smooth, not a hint of a Bounty Bar there.

The best bit for me was when I received an email from Hrishi this morning, I’d given Helen, Hrishi and John some preserves to take home to try and Hrishi told me he had eaten an entire jar of my ‘Proper Piccalilli’ in one fell swoop with simply boiled rice and said he had thoroughly enjoyed it.  From a talented Michelin starred chef of his calibre, that is praise indeed.