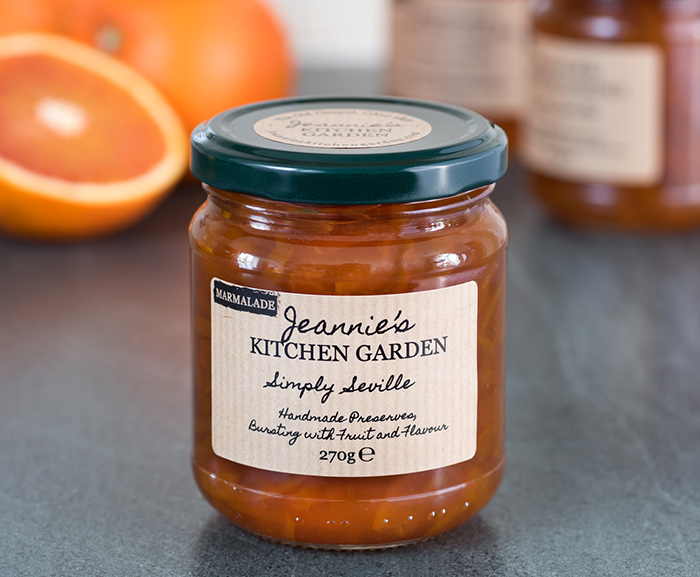 This week has seen the delivery to the Old Chapel of a very large consignment of beautiful Seville oranges.

The Sevilles, little knobbly beauties, arrive from Spain around now and then the season ends in February, almost as soon as it has begun, so I am making as much marmalade as I can, I don’t want to run out of stock of marmalade made with this wonderful fruit.

Much marmalade-making in the kitchen.  Many hours of painstaking slicing the cooked peel, the two jam pans on the stove, turning out daily batches.  The sharp scent of the freshly cut bitter oranges is so different from other ‘ordinary’ eating oranges and the house smells wonderful as the marmalade cooks, giving off its caramel-honey perfume.

When the weather is nasty outside, as it is today, wet and windy, it’s lovely to stand at the stove, making marmalade.

The origins of marmalade are pleasingly vague. The name would seem to come from ‘marmelada’ a Portuguese quince preserve which dates back to Roman times.

There are a few amusing tales about early marmalades, one being that when Mary, Queen of Scots, was a child and living at the French court, she was taken ill and the cooks in the kitchen made her a comforting sweet and sticky concoction from oranges which Mary’s maid named ‘Marie est malade’.

A more likely story is that in the 1800’s, in Dundee in Scotland, a ship carrying a cargo of bitter oranges, had run into difficulties and took refuge in the city’s harbour.  Rather than letting the oranges go to waste, ingenious locals made a preserve distinguished by boiled chunks of the sharp peels of the fruit.  A short time later, a local couple, James and Janet Keiller, who ran a sweetshop in the Seagate area of the city, opened a factory to produce ‘Dundee Marmalade’.  The company prospered and remains a well-known marmalade maker to this day.

The Scots are certainly credited with developing the marmalade we know today, they learned that by adding lemon juice and tying the lemon pips in a muslin bag in the pan, the marmalade would set before it turned to a paste, giving the marmalade its distinctive bright and translucent appearance and soft texture.

Marmalade seems to be a peculiarly British thing.  When Louisa May Alcot, American author of ‘Little Women’, came to England in the late 1800s, she described a ‘choice pot of marmalade and a slice of cold ham, essentials of English table comfort’.

Marmalade fell from grace in modern times as jam became more popular at breakfast time in Britain, other things such as Marmite and Nutella also elbowed their way in.  Children’s book character, Paddington Bear, however, was extremely fond of marmalade sandwiches and kept one under his hat for hunger emergencies. Paddington helped marmalade fans champion the cause and in recent years, marmalade is definitely back on the breakfast table.

The World Marmalade Awards at Dalemain, not far from here, take place on Saturday 16 March. Jane Hasell-McCosh, the chatelaine at Dalemain, is a keen supporter of preserving (pardon the pun) marmalade as a breakfast condiment. There is a wonderful old cookbook at Dalemain, with a marmalade recipe, Jane still makes her own marmalade to that recipe.   The Marmalade Festival weekend is great fun, thousands of people send in jars of marmalade to be judged and the event raises a significant sum for over 40 hospice charities with the major part of funds raised going to Hospice at Home Carlisle and North Lakeland.

The witch hazel’s in bloom, the snowdrops are up, I’m looking forward to the Spring but for now I am enjoying the late winter with my Sevilles.