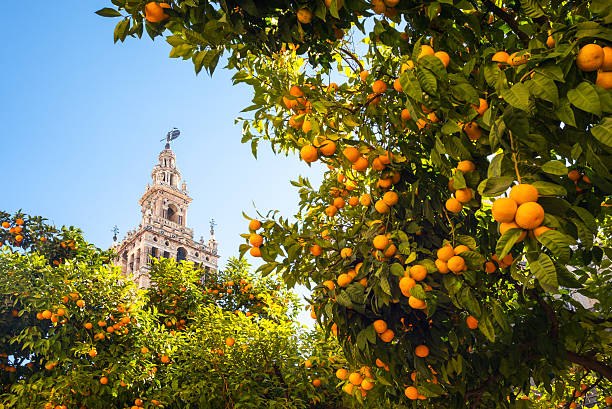 Winter is the orange season in the beautiful city of Seville, in Andalusia in southern Spain.  The lovely trees, some 48,000 of them,  line the wide boulevards and squares of the city, the bright orange fruits illuminated by the clear winter sunshine.

The Spanish don’t eat the bitter, knobbly-skinned, pip-filled Seville oranges.  Centuries ago, the Scots discovered the bitter little fruits made a wonderful sharp preserve.  The exact history of marmalade is lost in the mists of time but it is thought that a consignment of oranges found their way on a ship to Dundee where a canny lady by the name of Mrs Keiller came up with a use for them by concocting some kind of early orange preserve which became the renowned Keiller’s marmalade, commercially sold for over 200 years.

Ever since then, fruit farms near Seville have cultivated Seville orange orchards to supply the demand from the marmalade-makers of Britain.  The organic farm I get my Seville oranges from is Ave Maria.

Let’s get back to the orange trees of Seville.  All those trees drop their fruit on the roads and pavements, causing a slippery, squelchy mess, particularly treacherous when the streets are icy.  The city council has come up with an ingenious and innovative solution.  The municipal water company, Emasesa, collects all the fallen fruit and uses it in a processing facility to generate electricity from organic matter.  The peel is removed and composted for use as a farming fertiliser,  The juice is extracted and undergoes an anaerobic digestion process which generates a methane-rich biogas which in turn is used as fuel for the production of electricity.  It seems such a neat and rather charming use for the city’s oranges.

I have a vision in my head of charging an electric car in Seville and somehow the battery might emit the scent of oranges as one drove along.  Wouldn’t that be magical?!

Meantime, here in my kitchen, there is the wonderful smell of marmalade as a batch of my ‘Three Fruit and Cointreau’ marmalade bubbles on the hob.  I shall go and pot up the little jars of Spanish Sunshine.